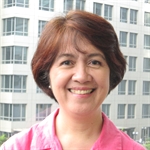 College professor by day, hanaso tutor by night – a drastic career change! Being in the marketing and business management for 25 years was enough. It was time to move on and share my knowledge and experiences to the younger generation.

My job as a professor and a tutor complement each other. To my college students, I share what I’ve learned from my hanaso students and vice versa. For example, in my Total Quality Management class, I’ve talked about the experience of one of my hanaso student on kaizen and kanban method. In my Ethics & Values class, I always cite the Japanese cultural values of diligence and honesty and how they practice them in their everyday life. Similarly, using my knowledge in marketing principles, I’ve helped one hanaso student in his dilemma on what label to use for the launching of their new organic product in the U.S. I teach Research and Thesis Writing so it comes in handy when I have to give input on one hanaso student’s post-graduate research paper presentation.

Now, four years later… I have no regrets for downshifting. I enjoy teaching and the academic world is fun unlike the common misconception. These are the jobs that you need not give up one for the other. Teaching and tutoring mesh beautifully like a well-woven tapestry.